Water beetles are the largest group of aquatic macroinvertebrates, with almost 300 species in the UK. 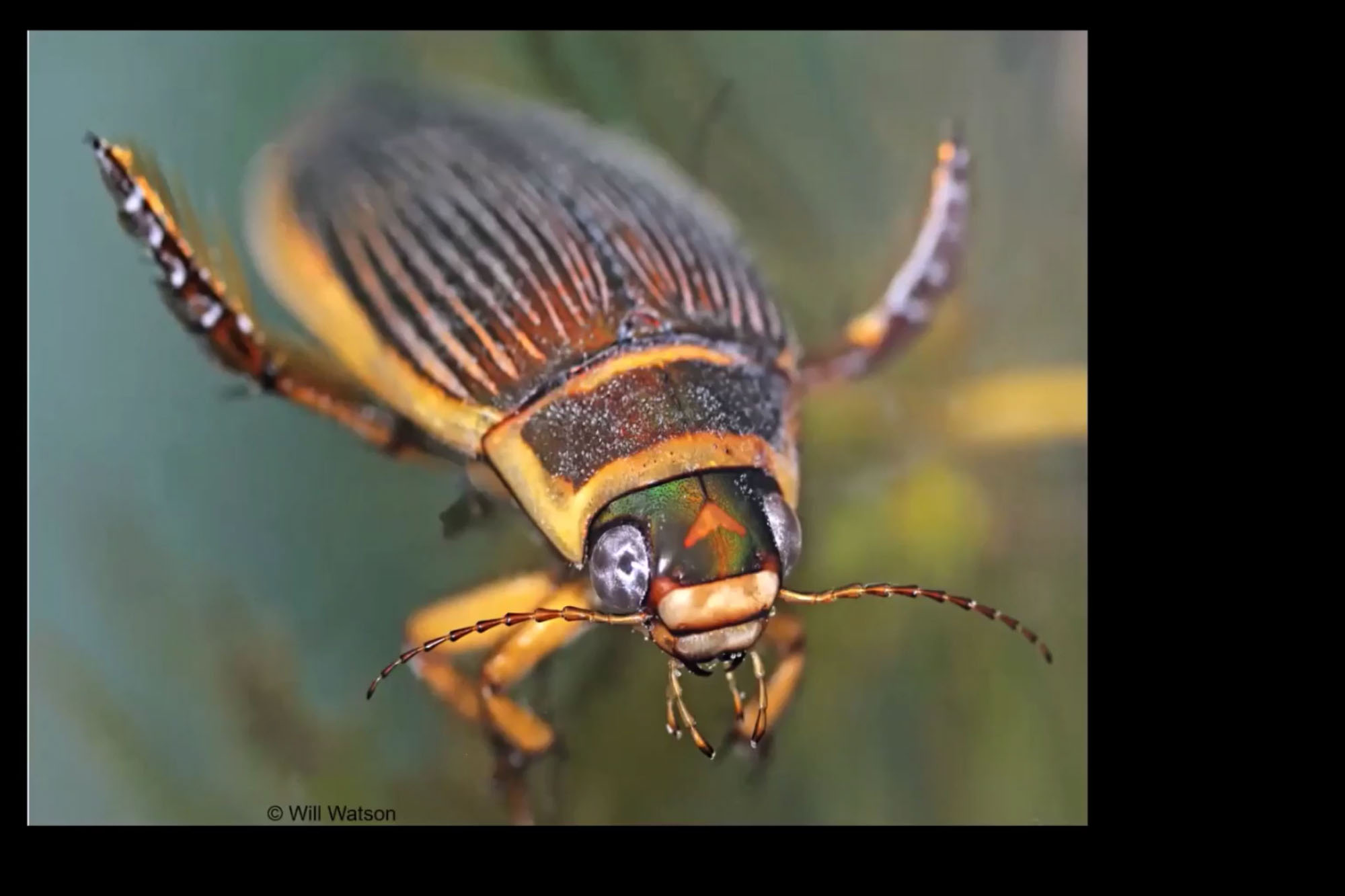 Great diving beetle Dytiscus marginalis
An impressively large species up to 32mm long, the Great Diving Beetle is common in all sorts of ponds across Britain.
The grooved elytra (wing cases) show that this individual is female. 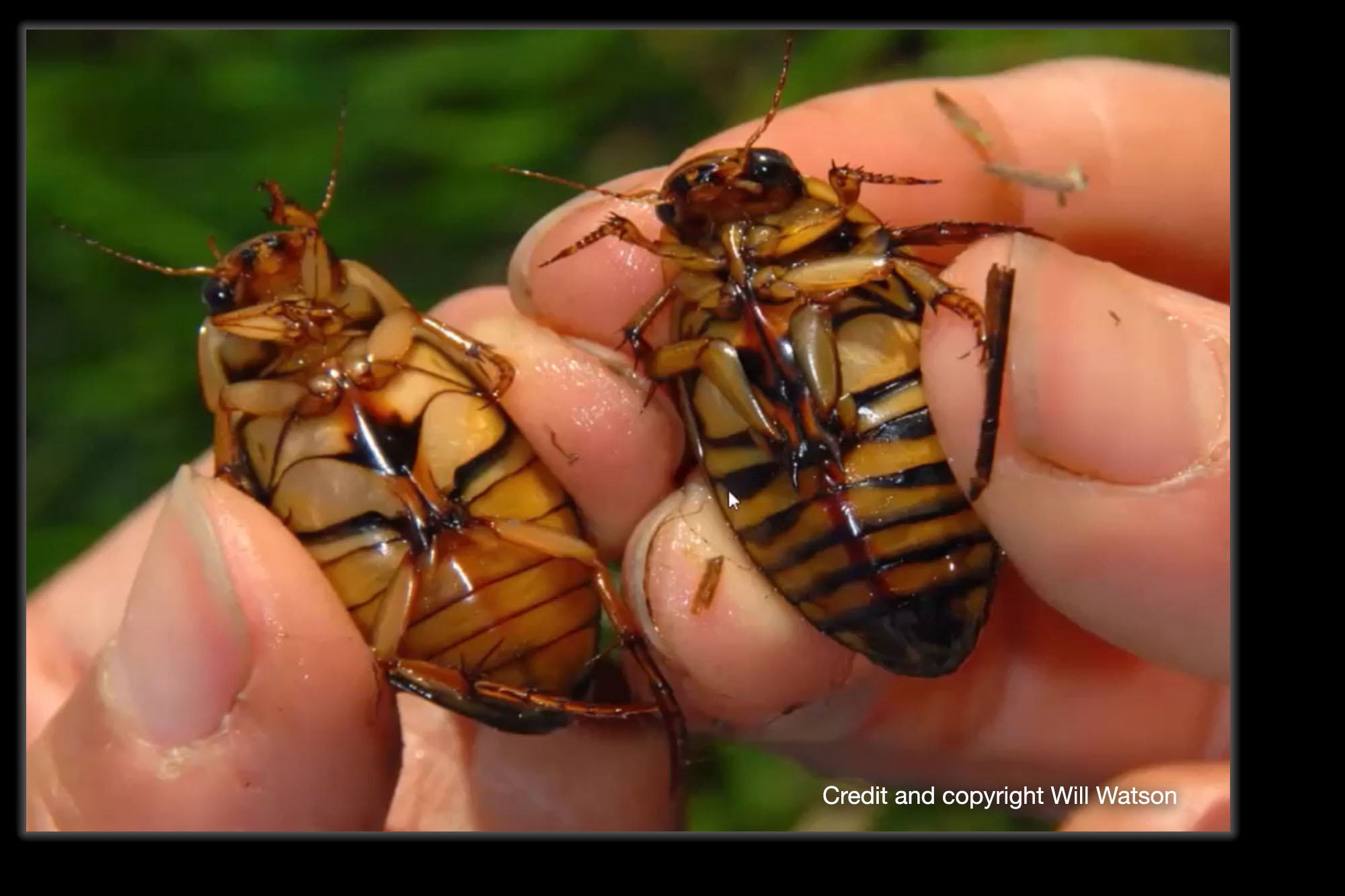 Identifying different species
There are 6 species of great diving beetle (Dytiscus) in Britain, with 4 in Herefordshire. A good view of the underside is important for identification. 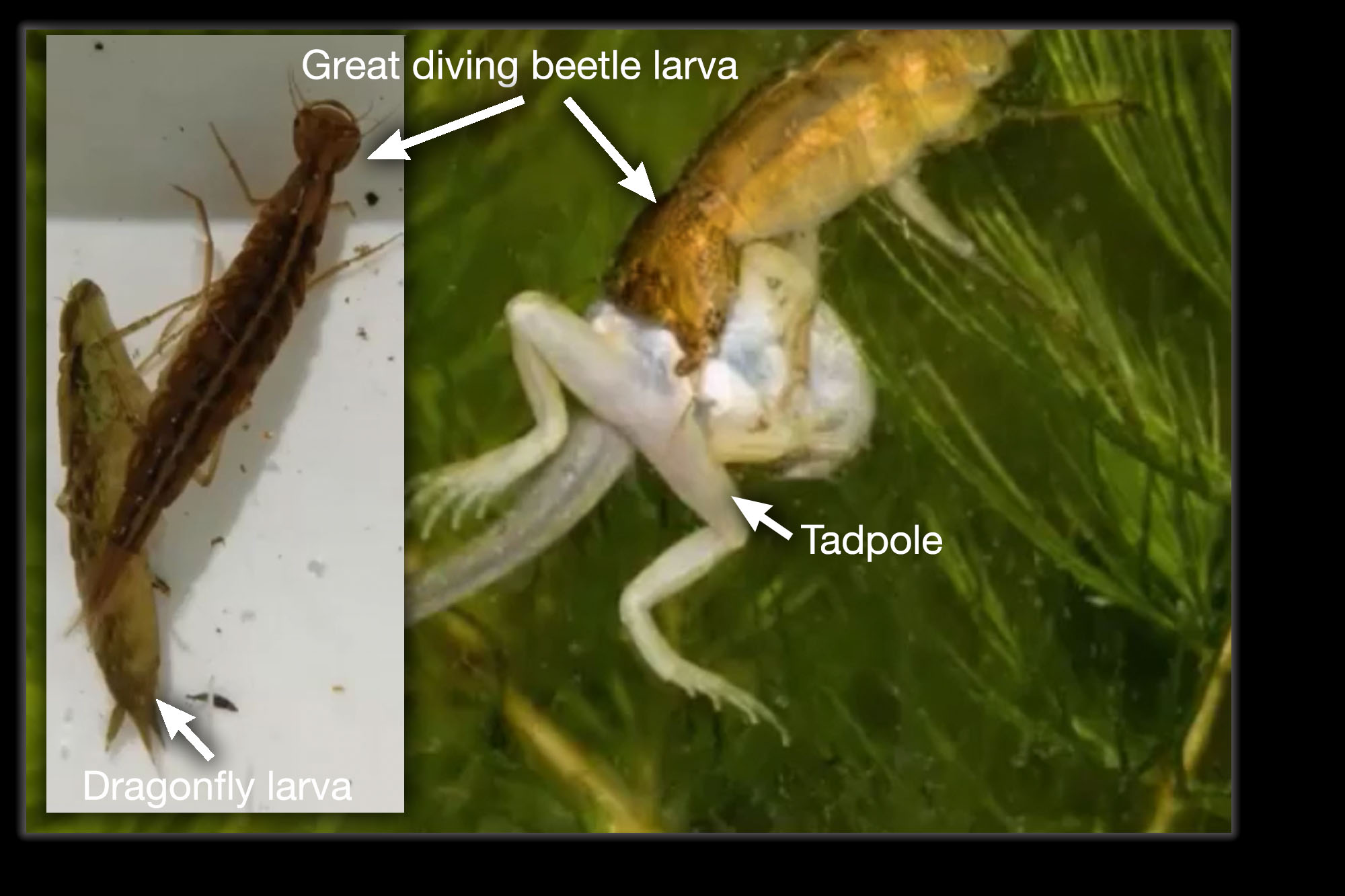 Stages of development
Beetles have a 4 stage life history: egg, larva, pupa, adult. Great diving beetle larvae develop during the spring and summer months and are voracious predators, feeding on all sorts of pond life but especially amphibian larvae. Large larvae are even capable of killing adult Smooth and Palmate Newts. 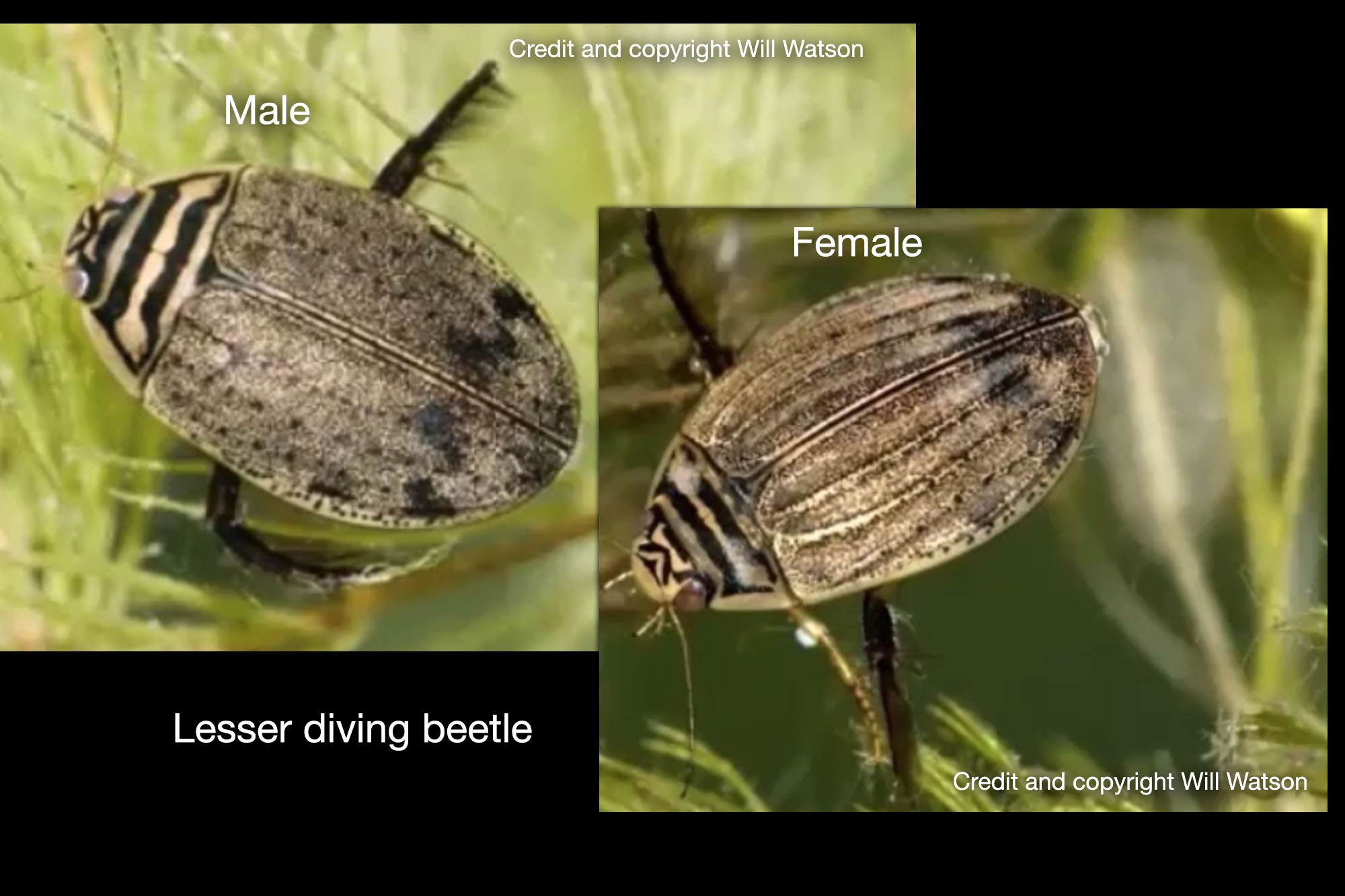 Male and female
Male and female Lesser Diving Beetles Acilius sulcatus. Males have suckers on their front legs which they use to hold on to the female during mating; females have grooves on their elytra which break the suction and allow the females to avoid unwanted male attention. A very common species in both natural and manmade ponds 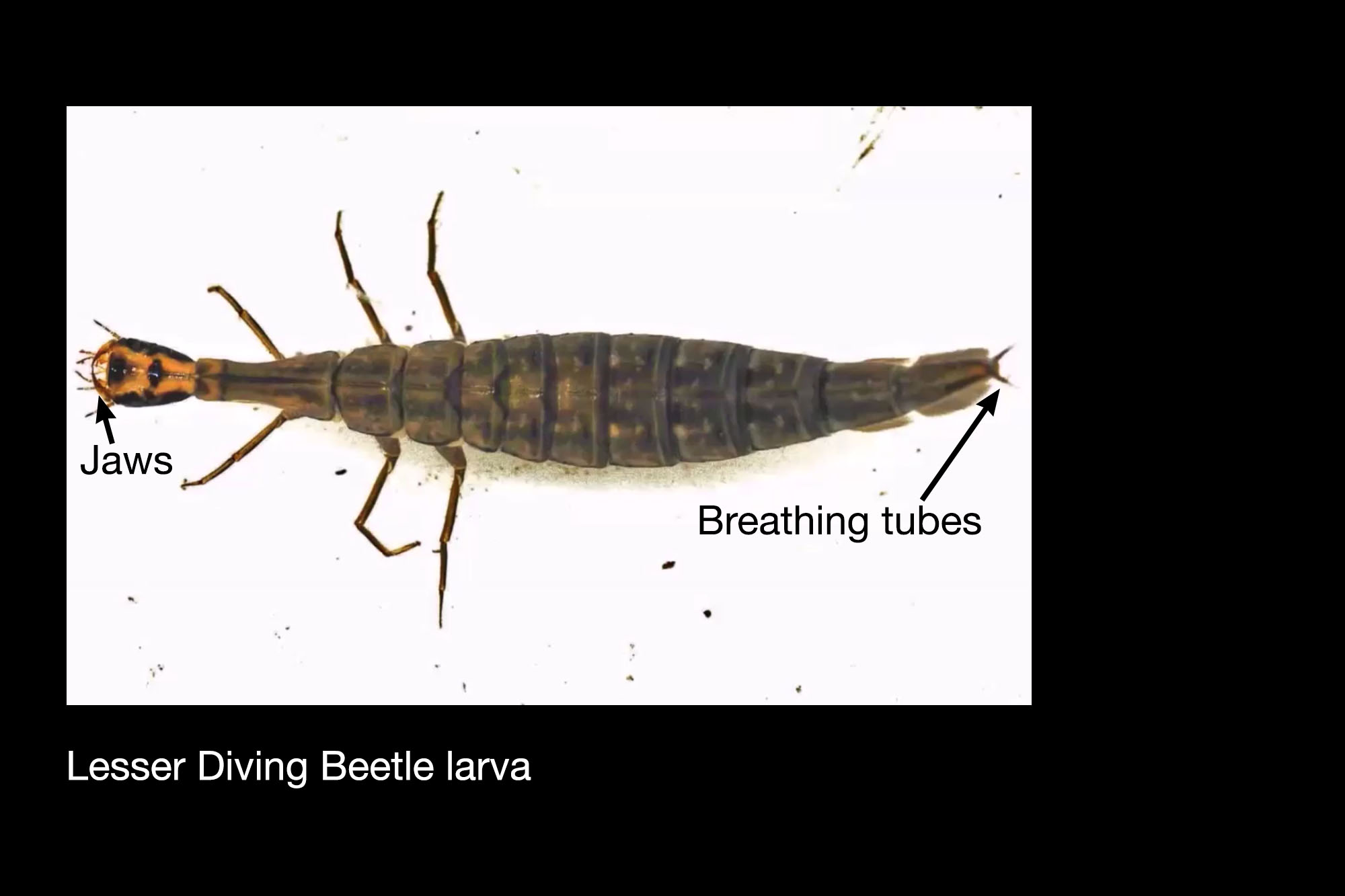 Jaws and breathing tubes
Larva of a lesser diving beetle showing the very narrow head with large jaws and at the end of the body the breathing tubes.
These larvae swim in mid-water of fish-free ponds, preying on small invertebrates such as water fleas (Daphnia). 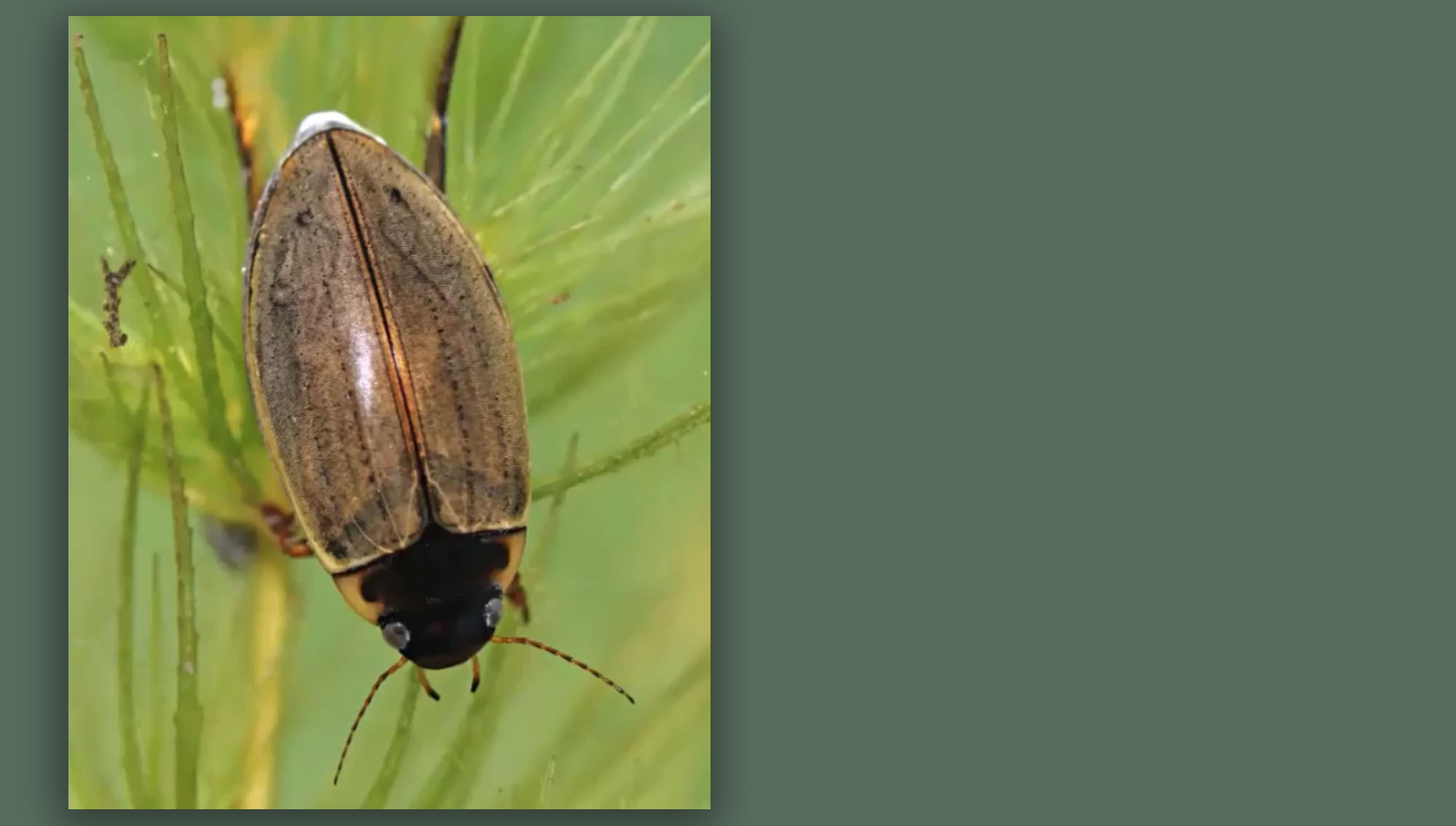 Colymbetes fuscus
A common species of diving beetle in Herefordshire ponds, easily recognised in the field by the combination of size and colour.
Adults are 15 to 17mm long. 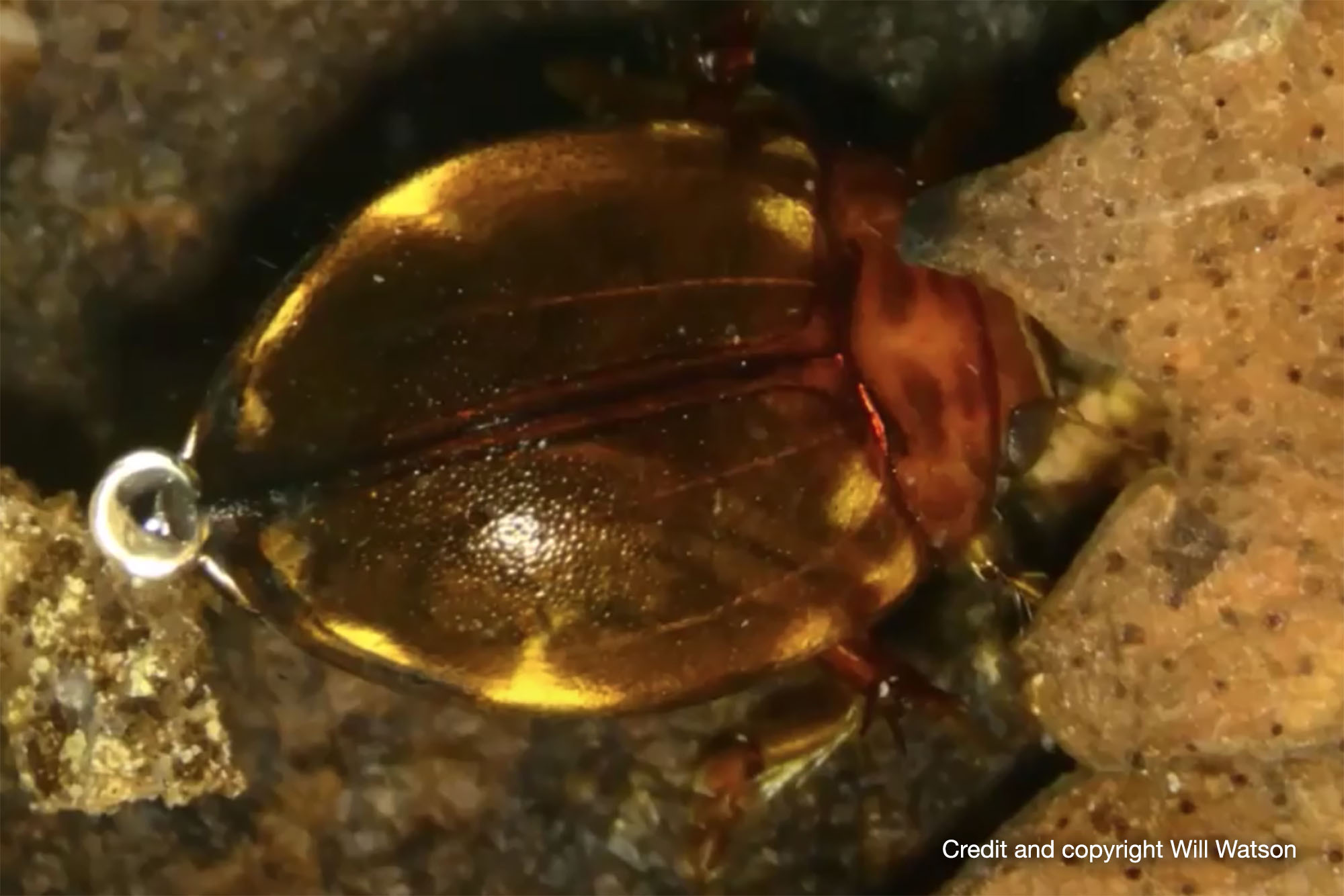 Cherrystone Beetle Hyphydrus ovatus
Only 4.5mm long, this species of diving beetle is easily recognised from its broad, deep body which gives it the appearance of a tiny cherrystone. Quite common in Herefordshire ponds 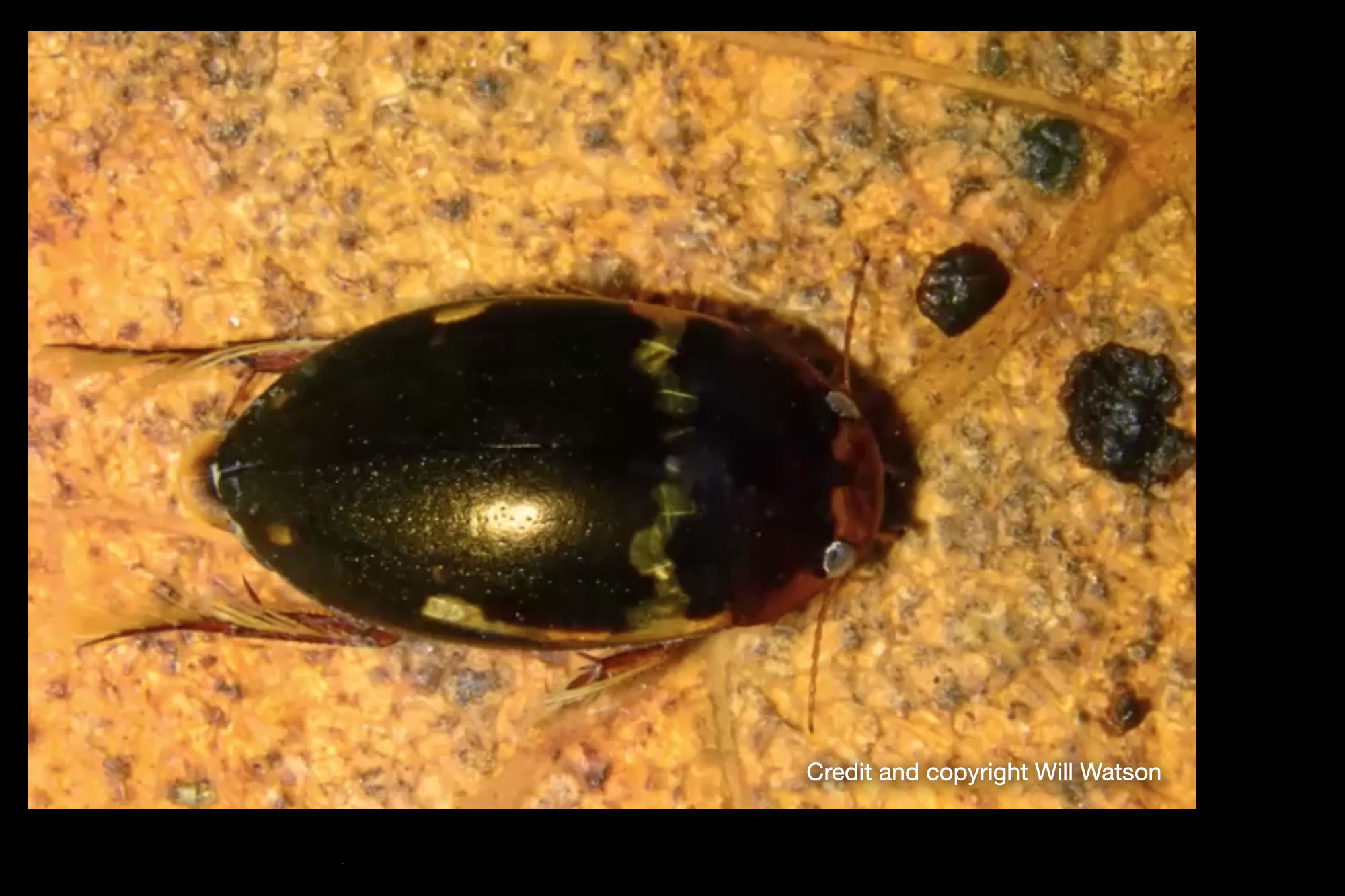 Agabus Undulatus
This distinctive diving beetle was discovered new to Herefordshire in 2019. It is known from just one pond in the county, the Mere Pool at Blakemere. The nearest known populations are 100 miles away in Cambridgeshire, so the isolated Herefordshire population may be a relic of a formerly wider distribution. 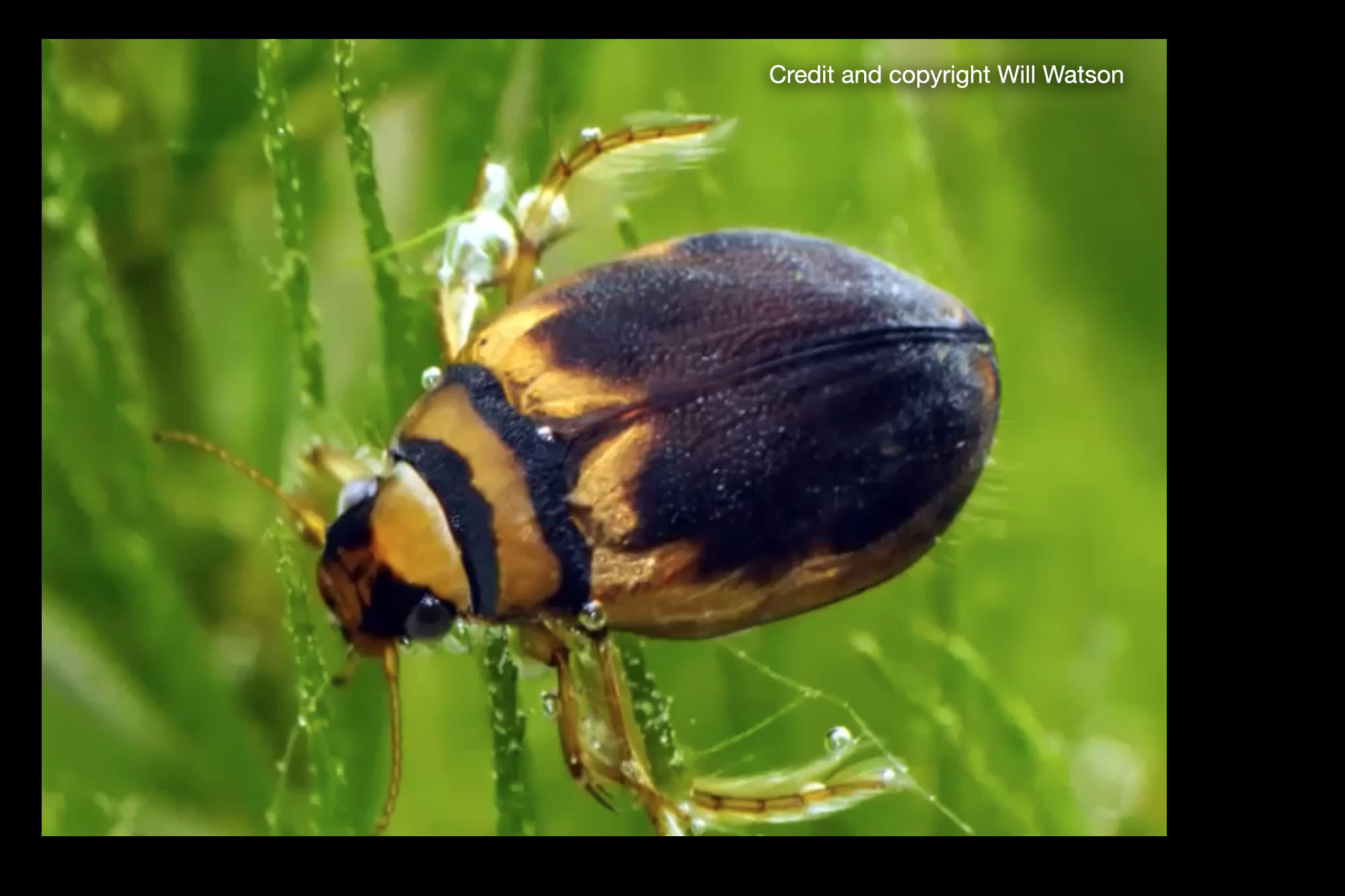 Squeak beetle Hygrobia hermanni
This unmistakable water beetle is capable of producing a loud squeak, especially when disturbed or handled. It is the only European species in the family Paelobiidae. 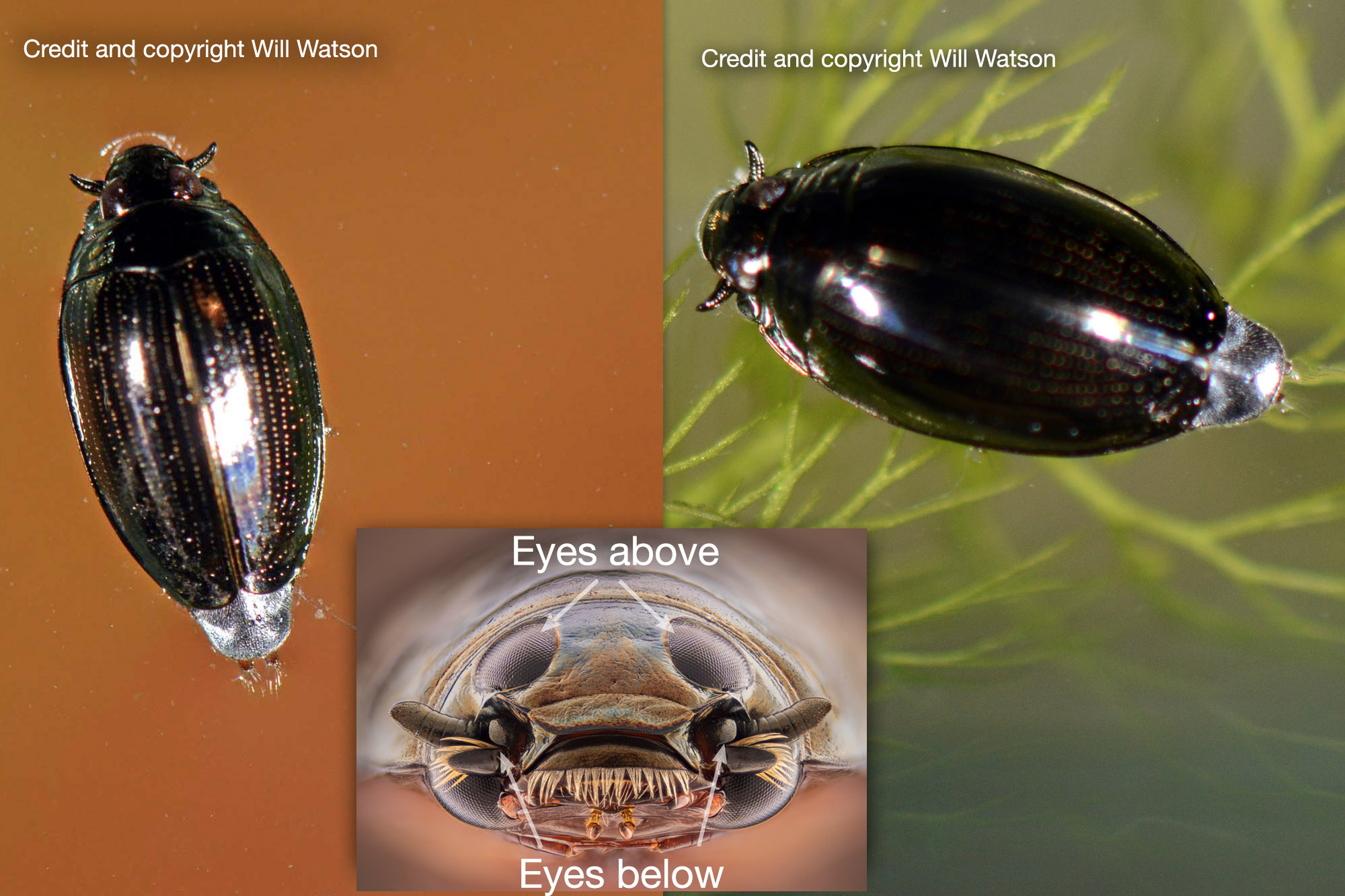 Whirlygigs
These beetles swim rapidly around at the water’s surface, often in large groups. Each eye is divided horizontally, giving it a 4-eyed appearance. This unique arrangement allows the beetle to see above and below water at the same time. 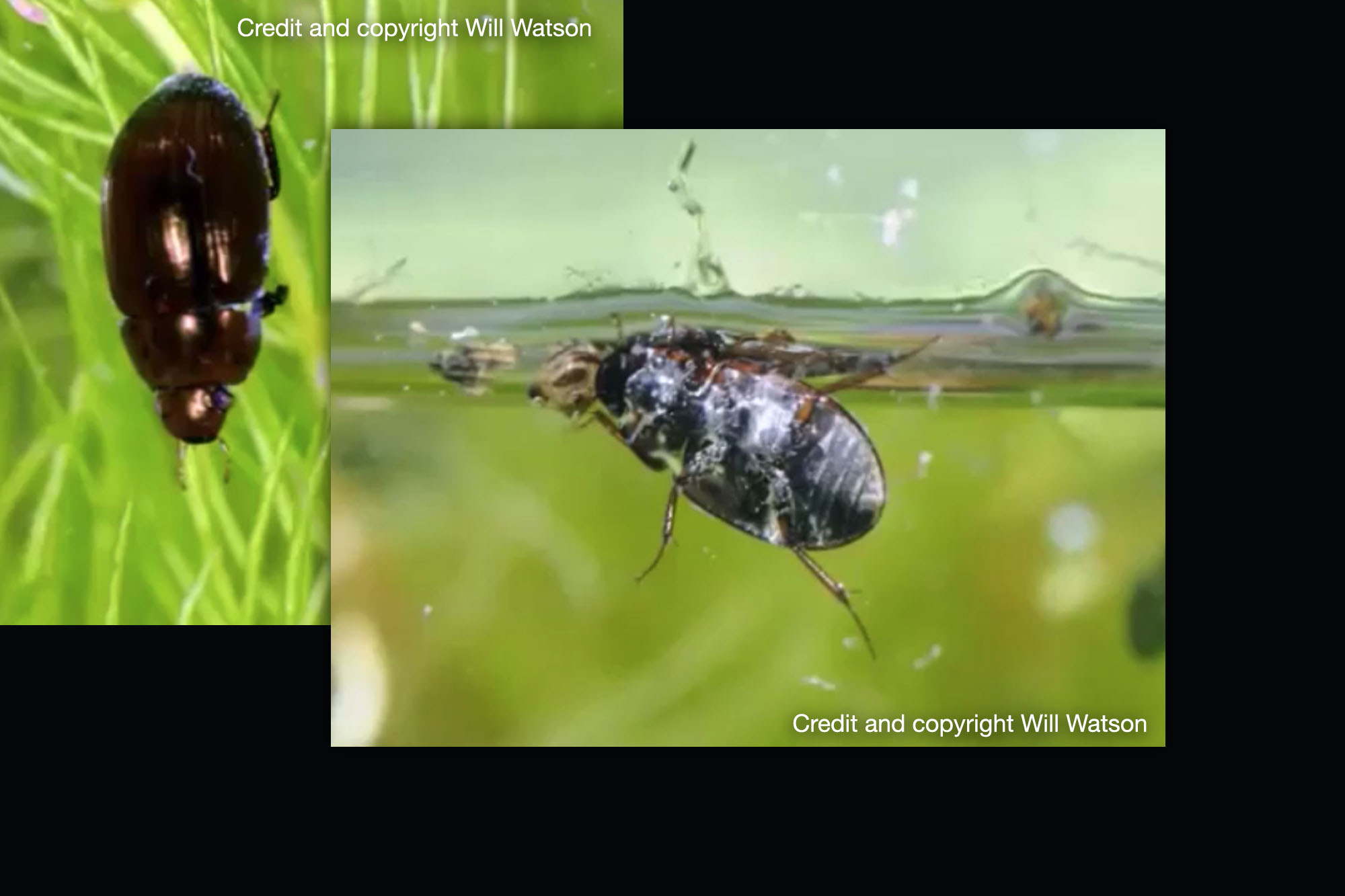 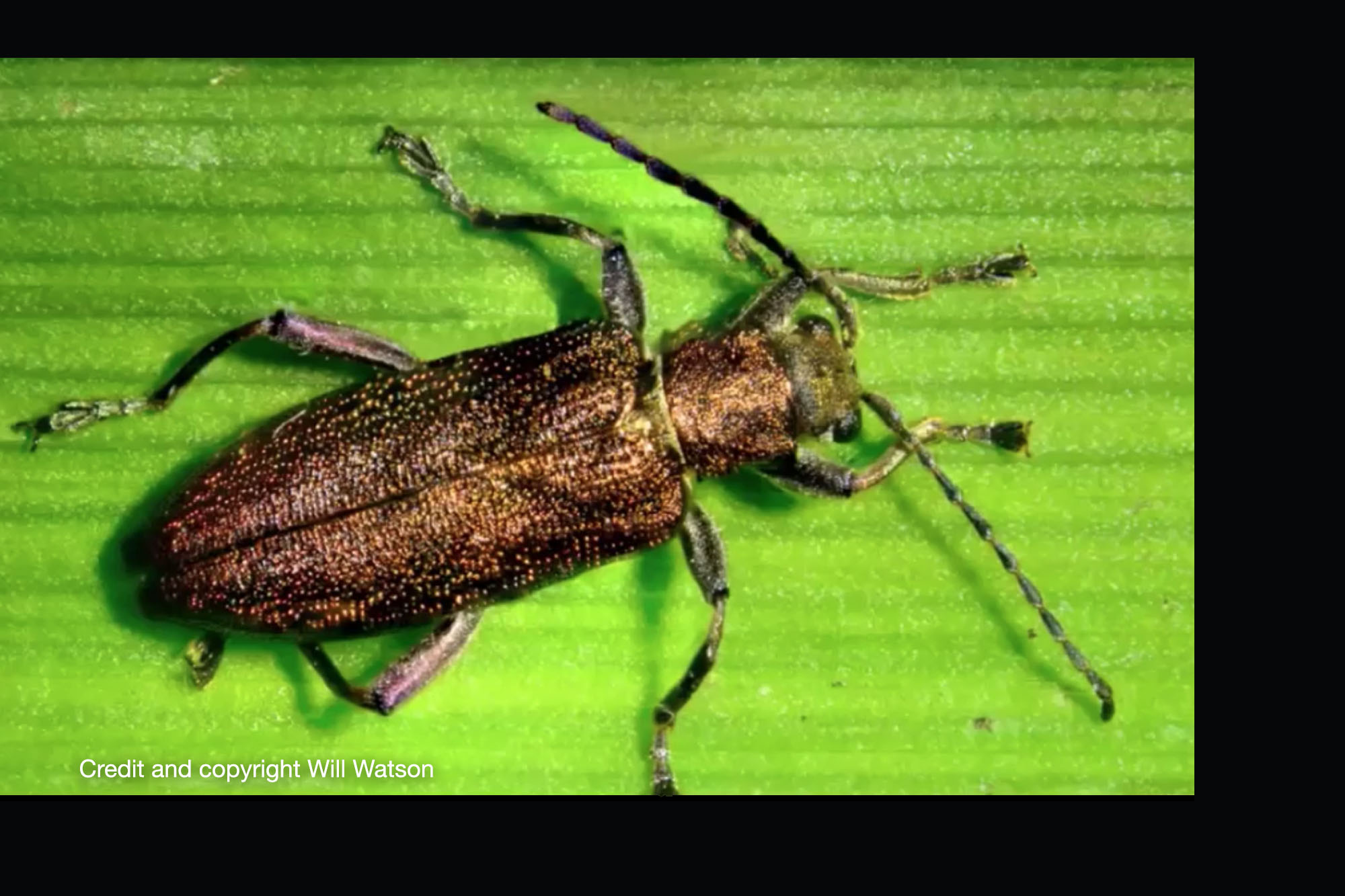 Reed beetle Donacia simplex
Actually a species of Leaf Beetle, sometimes referred to as an honorary water beetle as it does not spend its whole life cycle in the pond. The larvae feed on the submerged roots and stems of water plants, which the adults can often be seen on emergent plants such as Branched Bur-reed. There are several similar species in Herefordshire. 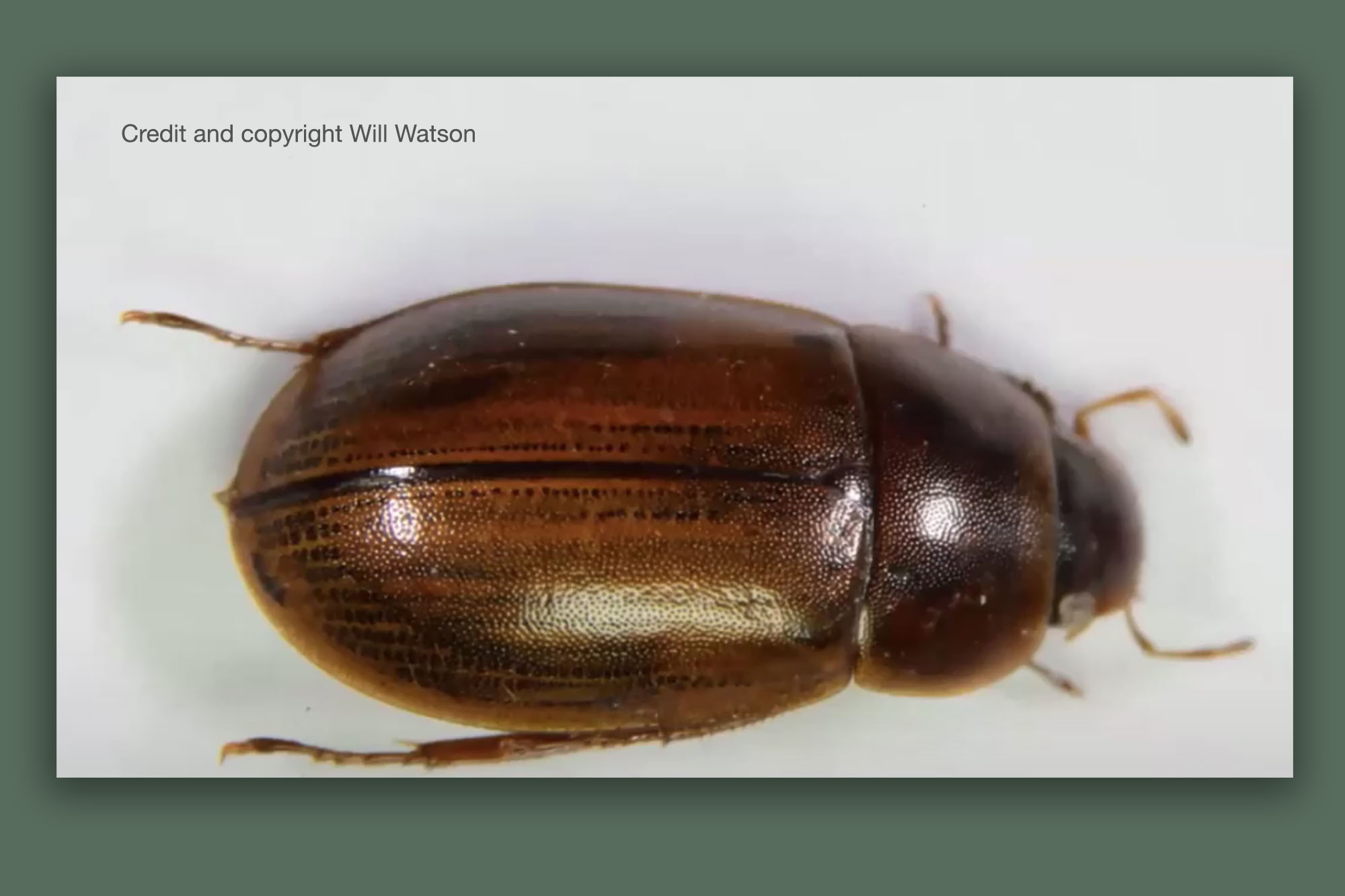 Helochares obscurus
One of the rarest British water beetles, in Herefordshire this species is found only in ice age ponds at Moccas Park and The Sturts.